After much neglect, and a few insane weeks, I’ve finally gotten the time to update a few things in my daily toolkit. First, RSS; I’ve decided to go all in with Feedly. I’ve found it to be a great cross-platform candidate that’s had to deal with a lot of scaling challenges in a very, very short period of time. I give them a lot of credit for building a massive platform and being able to continue to add features to what looks like a web app with great potential. At the moment, my only real gripe would be a progress indicator in the browser of the iOS app.

GReader Is Going Away, and I'm Not That Sad

There was a period where I was insanely into RSS. It was what I did every time I sat down at the computer. I fired up the Google Reader tab, and spent hours in there. I pored over everything, and it was a really fun game to try and get through everything and still retain at least one useful piece of information from my frenzied filtering. That was usually the case, as at that time, I had a pretty tightly curated list of feeds.

The DevOps mentality of “measure everything” can be really helpful in key moments when you need to make decisions. In particular, deploying two things side by side for the purposes of measurement can yield super helpful decision making information. For example, the Behance team was wanted to see how APC stacked up against Zend Opcode Cache.

“The Navy is a master plan designed by geniuses for execution by idiots. If you’re not an idiot, but find yourself in the Navy, you can only operate well by pretending to be one.” -Herman Wouk, The Caine Mutiny

The worst arguments I’ve ever had were with people who weren’t willing to bend on policy in situations where the policy made no sense. Context is everything, and most policy is made for a situation that has likely come and gone.

People with judgment will recognize this, especially in the context of running startups. Hopefully, they were the same person that made the original policy, and can see that things have changed. Smart companies have fewer policies, implicitly trusting their teams to make the right decision. 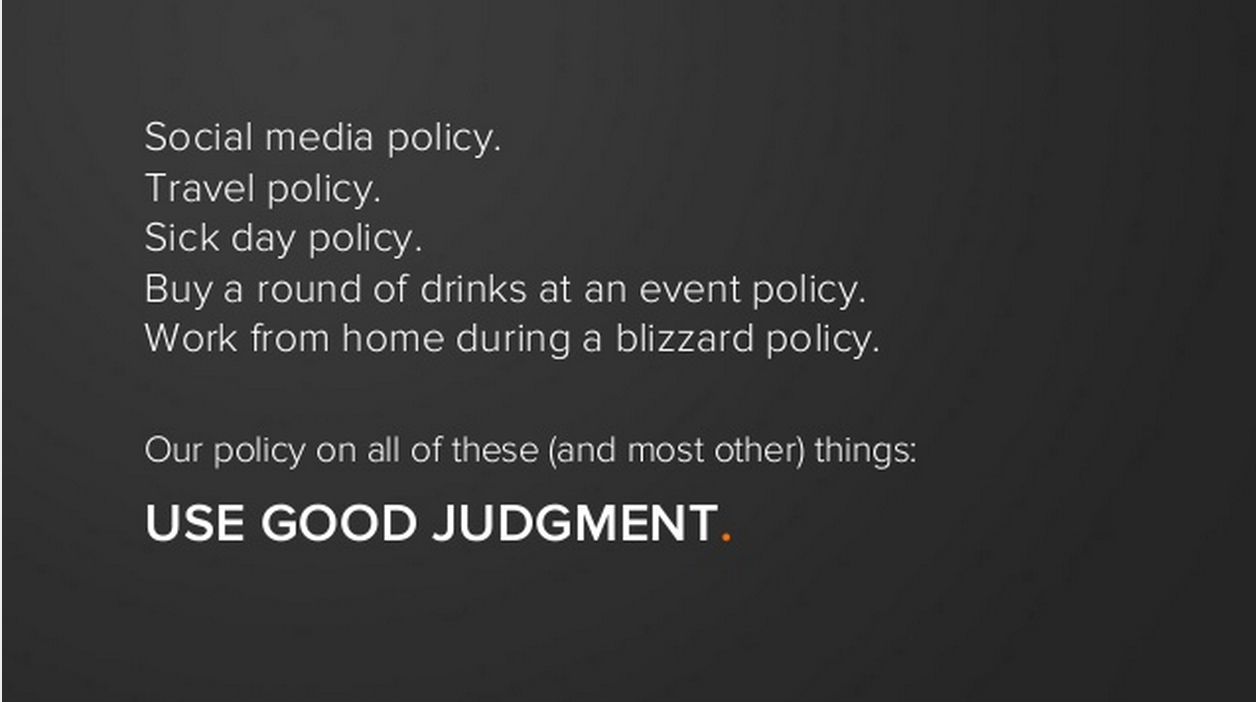 The takeaway here is that you can judge organizations and people based on how beholden they are to policy. Smart ones let you make smart decisions.

As we all may have some idea of at this point, performance on the web is one of the keys to success. However, finding actionable performance metrics can be a challenge. In the course of a web request, there’s a lot of stuff that happens. I’ll briefly explain it here in a couple run-on sentences.

When you click on a link, your browser or client looks up the location of the server via DNS, and then sends off an HTTP request, then your poorly secured router passes it on to the demons that are your local ISP, who then fiendishly pass that same request up to a backbone, which then traverses continents, oceans or even hemispheres, finally arriving at the data center or poorly ventilated closet where the web servers for that particular site live. That web server reads in that request for your stuff (probably porn, you sicko), and begins whatever its process may be to assemble the initial HTML payload, which hopefully involves validating that the way you asked for said stuff is correct, and if it is, then connecting to a database to actually get that lovely stuff, receiving a response, and puts together an HTML page with that data on it, plus references (more on those later) to CSS and JS to format the data in a way that makes sense, and even make it look a little purty. After that exhausting operation, the web server will take the opposite route through the backbone to the succubus ISP, through your router to your computer to your browser. Once that happens, you technically only have the payload HTML, which by itself isn’t a whole lot of fun, so then the browser will read aforementioned references to CSS and JS, and then make web requests for each of those files, which, btw, will follow the same process as the initial HTML payload went through, until you have all of the CSS and JS. Then you can finally improve your mind by thoughtfully reflecting on the highly intellectual prose you requested not too long ago.

The other night I was investigating a rather heinous utf8 issue. I was working on a local copy of Ubuntu 12.04 that contained the entire dev environment, except for data. So I exported a copy of the relevant data as a CSV, pulled it down, and attempted to run a LOAD DATA INFILE. Sane enough right? This is something I’ve done a million times in a bunch of different environments. However, in the vast, vast majority of cases, the error is typically pretty clear. In this case, not so much.

I’ve always believed that the Church is more a political entity than a faithful one. Ever since my sister’s Confirmation, when there were three collections, and the sermon admonished parents that every firstborn should be sent to seminary, I have been convinced that church and faith are entirely separately. Reading through history, it’s clear the papacy is more of a political organization than anything else. The wars, the influence over entire countries to go to war seem more the actions of an organization obsessed with power than one that existed to help people.

Last month, I decided to refresh my blogging platform. My Wordpress was old and busted, and working on it didn’t quite fit with the way I wanted to work. I tried tumblr for a few weeks, but it felt pretty constraining. Overall, I was looking for a platform that gave me control, and the ability to crack open the source and do what I wanted.

The community of app.net is certainly steadfast in their defense of what makes a great online community, and super eloquent in some cases.

They’re also not real open to the idea they might be wrong.

If you simply ask a programmer to implement a feature, but fail to share the purpose or the justification for said feature, all you get is a code monkey. Code monkeys merely translate requirements into code verbatim. There’s no room to trade concessions with the designers if I don’t know what you’re trying to do.